The vast majority of students in both groups (over 90%) said laptops are very or extremely important for their coursework; however, slightly fewer community college respondents (85% versus 91%) reported using laptops for all or most of their courses. This slight difference could be attributed to several factors. Not surprisingly, nearly all (97%) two-year and AA students live off campus, so they may use a desktop computer that already exists in their household, in addition to using a personal laptop.2 Students in the STEM fields, particularly those in computer and information sciences, reported higher percentages of desktop ownership than did other majors, which may suggest these students either want or require devices with more computing power (e.g., for personal gaming, specialty software for coursework, or more storage to meet their household's needs). And having access to those devices at home may be convenient or even necessary due to work schedules and family responsibilities.

The growth of certificate and degree programs in the area of additive manufacturing, where coursework focuses on 3D digital design and manufacturing technologies,5 is one possible explanation for the high value placed on 3D printing at two-year and AA institutions. In an effort to address an increasing skills gap in the manufacturing workforce, initiatives such as America Makes, "Creating Connections in Manufacturing Communities with Community Colleges," and the "Community College Advanced Manufacturing Career Pathways" are supporting industry and community college partnerships to train future employees; as a result, more community colleges are making 3D printing the centerpiece of design courses.6

The fields and disciplines students at community colleges are majoring in may shed some light on the differences in their use of and regard for 3D printing technologies. A plurality (28%) of the two-year and AA students in this study are majoring in health sciences, including professional programs; this is significantly more than students at other institution types (16%). Eighty-four percent of 3D printer users studying health sciences rated them as very or extremely important to their academic success, which suggests health science programs may be incorporating this technology into their curricula, or students are seeking out 3D printers as a supplement to their instruction. IT professionals at community colleges are recognizing the importance of these bleeding-edge devices as well. In a 2018 EDUCAUSE survey on extended reality (XR) technologies, most respondents at AA institutions rated the potential value of augmented reality (AR) and virtual reality (VR) technology as high (86% and 87%, respectively) in the fields of medicine and health.

Making this technology more accessible on community college campuses could help prepare students for positions and careers in health care, where labor shortages are being reported.7 The demand for professionals in allied health care (e.g., medical assistants, occupational therapists, pharmacy technicians, dental hygienists, surgical technologists, laboratory technicians) is also expected to impact rural parts of the United States substantially.8 Research has shown that community colleges play a critical part in educating and training residents and workers in nonurban areas in the health sciences. For example, a Rural Health Research Center study found that the majority of individuals who finished allied health programs for occupations that are most commonly available in rural areas did their coursework at community colleges.9 Another study revealed that 75% of registered nurses working in rural areas obtained their foundational training in associate degree and/or certification programs.10

Almost twice as many female as male community college students said 3D printers were very or extremely important to their academic success. Women who rated 3D printers highly were more likely to be health sciences, including professional programs, and engineering and architecture majors. 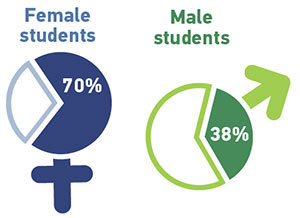 Regardless of geography, though, two-year and AA schools are providing opportunities for health science students to build skills that can translate to immediate and local employment, and these advanced technologies can aid in their preparation. Some community colleges are already leveraging the power of these technologies, from using VR programs to develop their clinical and empathy skills11 to 3D printing assistive devices for individuals with disabilities.12 Using VR for patient simulations is especially useful in helping students strengthen their skills, as it allows for the repetition of hands-on experiences (such as practicing in emergency medical situations or diagnosing rare conditions).13 With this is mind, providing greater access to 3D printers and other next-gen tech such as AR/VR headsets can help future practitioners train in safe environments with simulated tools and equipment.14 Specific recommendations for deploying a campus 3D technology initiative are outlined in the 2018 Learning in Three Dimensions: Report on the EDUCAUSE/HP Campus of the Future Project. Allocating money, staff, and time to its development and implementation is the first step.