After a difficult freshman year, Lucas realizes he needs help. In high school he was diagnosed with a condition that affects his fine-motor skills, and he received therapy and accommodations that helped him succeed. When he started college, he decided not to register with the campus Office of Disability Services, but the demands of college proved challenging, and he struggled to keep up. Writing in longhand for extended periods is painful and results in illegible class notes. Using his laptop works best for him, but half of his instructors last year didn't allow laptops in class. The Office of Disability Services requires proof of his condition that must be no more than three years old, so Lucas visits his doctor for an updated exam, earns money to cover the medical fees to fill out his accommodation forms (which aren't covered by his insurance), and registers. He receives an accommodation to use his laptop in class and notifies all his instructors before classes begin. On the first day of his Intro to Economics course, the professor reviews the course policies, which include a ban on personal tech devices in class. As the student next to him packs her laptop away, she says, "Didn't you hear her? We can't use our computers in class." Even though he has an accommodation, Lucas doesn't want to talk about his disability with a stranger. He closes his laptop screen and takes out a pen and paper.

The Americans with Disabilities Act of 1990 (ADA) requires that colleges and universities make reasonable accommodations to students with documented disabilities by providing or modifying equipment, making facilities accessible, and/or providing readers or interpreters. The institutional provision of accessible web content and technologies is not then merely an issue of ethics or morality but one of legal liability. Institutions that fail to properly accommodate the needs of their students may find themselves confronted with lawsuits, complaints, and settlements. However, one of the major problems facing colleges and universities is that institutions may simply not be aware of students' needs. Of the 7% of student respondents who self-identified as having a physical and/or learning disability requiring accessible or adaptive technologies for their coursework in 2018, a concerning 27% rated their institution's awareness of their needs as poor.1 More worrisome is the fact that students' poor ratings of their institutions' awareness of their needs have increased by 16 percentage points over the past three years. The news is somewhat better when it comes to the technology assistance these students reported receiving. The largest group of students (42% of those reporting a disability) said their support was good/excellent, and slightly fewer reported ratings of poor and neutral compared with last year.

Far more students with physical disabilities (58%) reported poor institutional awareness of their need for accessible technologies than those with learning disabilities (7%) or with both physical and learning disabilities (8%) (see figure 9). Forty-four percent of students at DR public universities said knowledge of their needs was poor, which is significantly higher than any other Carnegie class (the next closest are MA public and DR public, both at 10%). AA institutions received significantly better marks than other institution types, with awareness and support of tech requirements rated as good or excellent by the majority of students at these schools. BA institutions also scored well on awareness and especially on support. Reinforcing this finding, our data indicate that institution size is also a factor, as poor ratings for awareness are highest (41%) and good/excellent ratings are lowest (32%) for institutions with full-time enrollments of 15,000 students or more. Slightly more students who have physical disabilities attend public DR institutions, and 93% of these students are eligible for Pell Grants. 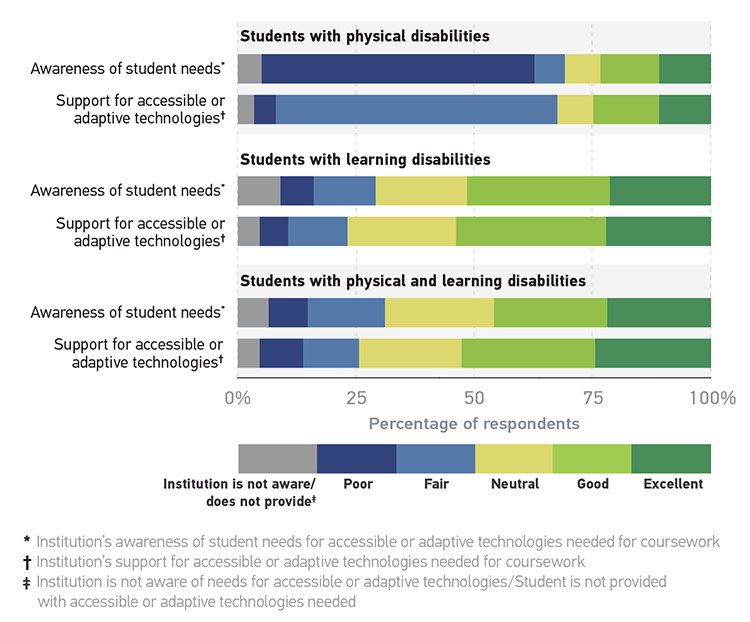 Overall, our data suggest that IT accessibility is an issue for many college students with both physical and learning disabilities. According to these students, institutions have a lot of room for improvement. Awareness may be especially challenging for the largest public DR institutions given the sheer number of students they serve, but resources to accommodate may be an issue as well. Being aware of these needs also depends on whether students choose to disclose disabilities to their institutions. Indeed, research indicates that student disability disclosure rates are low in colleges and universities.2 Many students who have diagnosed disabilities do not divulge their disability for fear they may be stigmatized or penalized by their instructors or may not be believed if their condition is not apparent.3 AA institutions may be more successful in addressing these needs since community colleges enroll more students with disabilities4 than do other institutions.5 Many community colleges also offer transition programs that provide academic support, and they help students develop self-advocacy skills so they can be more successful when they go on to four-year institutions and/or join the workforce.6 However, some of these programs, which are also offered by other institution types, are fee-based, which may make them financially out of reach for some students, especially when we consider that most students with disabilities are eligible for Pell Grants, indicating a socioeconomic disadvantage.7 To increase institutional awareness and provide better support to students with disabilities, we recommend the following:

While accessibility should certainly be a campus-wide commitment, IT can take these steps to be a strategic institutional partner in creating a more inclusive and supportive environment for students who have disabilities and learning differences.