General Experience of IT on Campus

Figure 1. Faculty’s overall experience of technology at the institution

Respondents at associate’s and bachelor’s institutions are significantly more satisfied with the technology and support at their institution than respondents at master’s and doctoral institutions. The reason for this is not clear. As will be discussed below, no Carnegie class of institutions is more likely than any other to provide computing devices to their faculty, nor are faculty at any specific class of institution much more likely to use their institution’s IT help desk. Somewhat more surprisingly, there were no significant differences in the level of satisfaction between full- and part-time faculty or among different academic ranks.

Respondents were asked: “When you need technology support or assistance for work-related activities, what do you typically do?” A list of nine items was provided, and respondents could select up to three. The first thing to notice about figure 2 is the two very clear groups of responses: Nearly half to three-quarters of respondents selected the items in the first group, while fewer than 10% of respondents selected the items in the second group. These two groups are clearly distinguished by their relative levels of perceived expertise. It is not clear in what order faculty seek information from these sources, what sources they consult first, second, third, etc. Nevertheless, most faculty seek information from sources that they perceive as having expertise, such as their institution’s IT help desk, their colleagues, or themselves. All other information sources come in a distant second.2 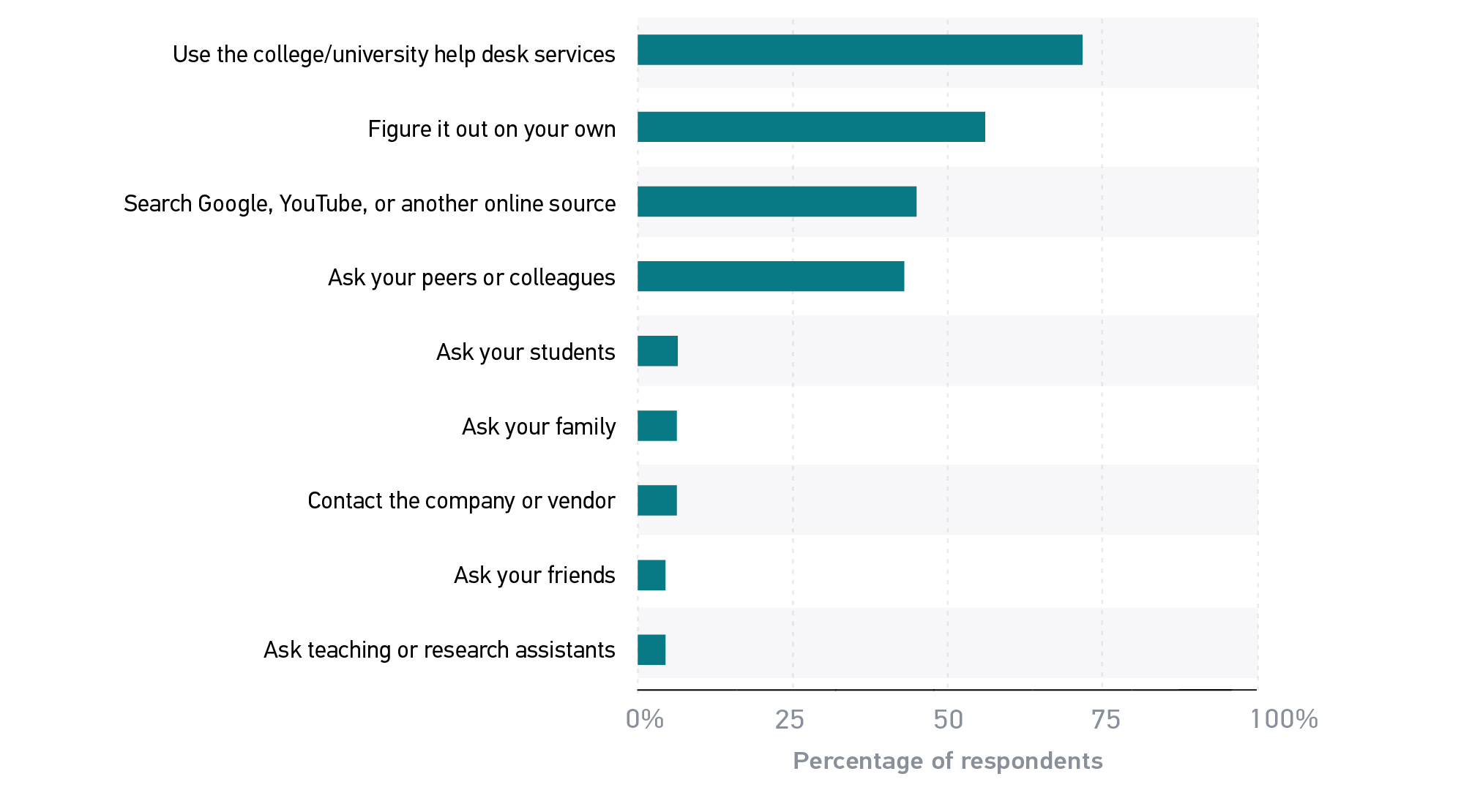 Faculty, of course, operate in a reputation economy in which reputation is largely based on expertise. So it is no surprise that faculty prioritize information sources that they perceive as signifying expertise and deprioritize other sources.3 A faculty member’s perception of expertise may be incorrect: Students or research assistants, for example, may in fact have quite a bit of knowledge about certain IT issues, and a company may be the best source of information about its product; but that is not the point. While an information seeker may fail to appreciate the existence of an information source, perception is reality here: Faculty prioritize sources of perceived expertise, particularly when that source of expertise is themselves or their colleagues. Decades of research exists on information-seeking behavior and the information search process,4 much of which shows that the principle of least effort applies to information seeking,5 as it does in so many other arenas. It is possible to move beyond simple satisficing in information seeking, but this requires experience.6 Faculty, of course, gained that experience thanks in part to years of training in graduate school, and thus it has become second nature for faculty to rely on and trust expertise.

These findings have clear implications for institutions’ IT help desks. Many help desks are in libraries or other locations that are intended to be convenient for students. However, a far greater percentage of faculty than students use their institution’s help desk.7 It is not clear from this survey how faculty are making use of the help desk, but it seems likely that more faculty members’ use is mediated (phone, e-mail, etc.) than in person (at the desk). Therefore, campus IT units need not necessarily gear their help desk service toward faculty but should at least provide significant support to faculty for the types of issues that they are likely to encounter (e.g., assistance with LMS functionality, connecting to institution-provided services while traveling). At many institutions, IT support is distributed across academic units—a hybrid of centralized and decentralized;8 these local help desks are in a good position to develop customized support services.

These findings also have clear implications for faculty themselves. Any help that a faculty member receives from the help desk, or training from any source, not only helps that faculty member individually but also potentially helps that faculty member’s colleagues later. The IT units in institutions of higher education would therefore do well to provide and promote training to faculty. Such training or workshops will not only directly benefit the recipients but are also an opportunity to “train the trainers,” as faculty are likely to pass their knowledge along to their colleagues.9

Information Security at the Institution 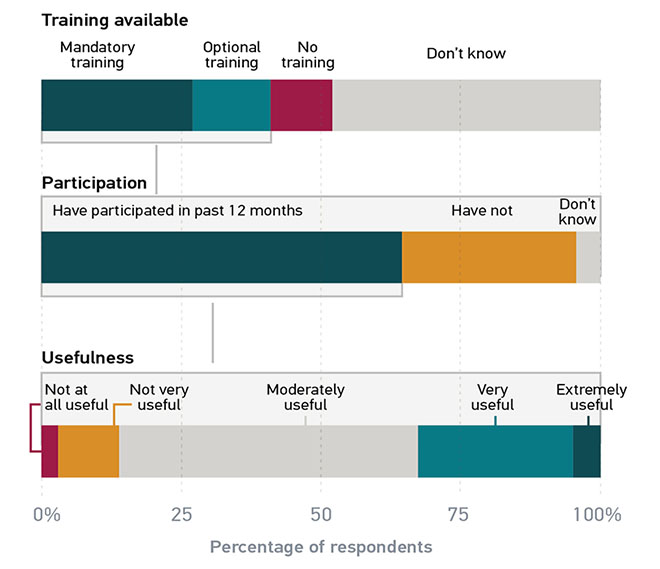 Respondents were asked a small set of questions about their level of confidence in their institution’s information security practices and its ability to safeguard a variety of types of information.10 By and large, faculty have a great deal of trust in their institution’s information security practices: Between two-thirds and three-quarters of respondents agreed or strongly agreed that they have confidence in their institution’s ability to safeguard information. This is consistent with the results of the 2015 faculty survey,11 with one notable exception: A far greater percentage of respondents (an increase of nearly 30 percentage points) agreed or strongly agreed that they “understand relevant university policies” about data storage in 2017 than did so in 2015. This speaks well of efforts by campus IT units to communicate policies over the past two years.

Returning now to the questions about information security training, respondents who answered that they had participated in their institution’s information security training in the past 12 months were asked a third question: How useful was this training?12 Perhaps unsurprisingly, the most common response to this question (54%) was the midpoint of the scale, “Moderately useful.” However, approximately a third of respondents found this training very or extremely useful.

Finally, respondents who answered that their institution’s information security training was not very useful or not at all useful were asked a final, open-ended question: How can your institution make information security training more useful? As might be expected, since only those who responded to the previous question negatively were asked, the responses to this question were quite negative. Nevertheless, these responses yielded some useful and actionable advice. One prevalent theme in these responses was a sometimes quite intense dislike of third-party training videos. In some cases, respondents indicated that these videos were outdated, which significantly blunted the impact of their message. Some respondents indicated that the information in these videos was common sense (such as how to create secure passwords13) and thus came across as condescending. Several respondents suggested that written documents could convey the same information in less time and less irritatingly. Many more suggested that live training sessions, offered in person and in a classroom, would be far better received.

An equally important theme in these responses was customizing the training for the institution, for the discipline, and for the types of data collected by and activities being performed by the faculty member.14 Many respondents suggested that the training was too general to be useful and that they would appreciate specific recommendations for tools they can use, beyond simply installing the institution’s enterprise-scale security software suite. They wanted specific policies that they can follow in specific contexts, and information on how to identify security concerns such as fraudulent e-mail and security breaches. A few respondents found the training too technical, though a far greater number wrote that, as experienced technology users, they found it too simple. Many of these respondents suggested that there should be more advanced levels of training and that one should be able to opt out of more basic levels. Several respondents were clearly faculty in humanities disciplines because a small but important theme that emerged was that much of this training is oriented toward securing research data and has little to say about the more creative work that might be produced by faculty in, for example, a creative writing or graphic arts department. These examples emphasize the need for institutions (or for organizations from which institutions license or purchase such training) to customize information security training, not merely to keep the content relevant and up to date but to ensure that the message of the training is heard at all.

IT is integrated into nearly every aspect of higher education, so it is critical for faculty to have access to devices for their personal and professional use. Respondents were asked if they personally own, or if their institution provides them with, any of a small set of common types of devices.15 Figure 4 shows a finding similar to what ECAR found in 2015, that laptops continue to be the workhorse for faculty, with fully 97% of faculty having one (combining both those provided by the institution and those personally owned).16  Desktops aren’t far behind, with 85% of faculty having one (again, combining institutional and personal ownership). Those laptops and desktops are provided by the institution to more than half of our respondents, with desktops having the edge over laptops (61% to 51%). The percentage of respondents’ institutions that provide laptops is up slightly from the 2015 faculty study.17

Figure 4. Provider of the devices that faculty use most 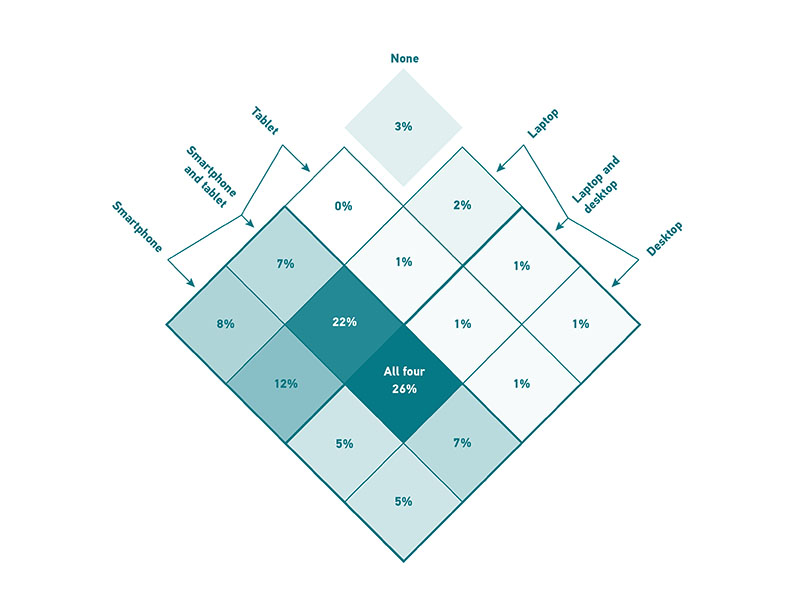 While no Carnegie class of institutions is more likely than another to provide devices to their faculty, there was some variation across disciplines. Faculty in disciplines that are traditionally vocational but with the advent of data science are becoming increasingly computerized (e.g., agriculture and natural resources; and manufacturing, construction, repair, and transportation) are the most likely to have desktops and laptops provided by their institution, while faculty in the humanities (e.g., liberal arts, fine and performing arts) are the least likely. Somewhat surprisingly, disciplines generally thought of as requiring high-performance computing (e.g., computer science and engineering) were solidly in the middle of this list. This latter finding may reflect the fact that these disciplines do require high-performance computing and therefore some faculty in those disciplines may provision their own hardware through grant funding rather than work with an institutional standard device inadequate to their computing needs.

The finding that more faculty personally own laptops than desktops is consistent with device ownership trends found in different contexts. The Pew Research Center found that in the United States at large, laptop ownership surpassed desktop ownership in 2011.18 That laptops are increasingly the preferred “heavy” device for personal ownership perhaps reflects the increasingly mobile nature of computing generally. This is borne out by the slight increase since the 2015 faculty survey in the percentage of faculty owning “light” devices such as tablets and smartphones. Smartphones in particular are becoming ubiquitous, with 93% of faculty personally owning one. Despite this, however, 22% of respondents say they are provided a tablet by their institution, while only 2% are provided a smartphone.

As discussed above, most institutions of higher education provide a laptop or a desktop to faculty. This makes sense, given that these devices remain more able than tablets and smartphones to support certain categories of complex applications, such as statistical analysis software; they also tend to be easier to use for production work, such as writing and grading papers. Given that the job of faculty involves a great deal of both writing and grading, institutional support for these “heavy” devices continues to make sense. But here there is an interesting crossover with the findings from the 2017 student study: Fully 83% of students used a smartphone for course-related activities for one or more of their courses, and 25% used a smartphone for all of their courses; two-thirds of students consider it very or extremely important to be able to use a smartphone for course activities. Given that students are so extensively using handheld devices for course activities, it may be worthwhile for institutions of higher education to consider providing (or sharing the cost of) such devices to faculty, so as to better enable faculty to support students on the platforms and in the environments where they are.