Estrella Mountain Community College (EMCC), one of the ten colleges in the Maricopa Community College District of Arizona, recognized that today's college students have very different ideas about how and where learning takes place. To meet these changing needs and expectations, the college aimed to maximize learning opportunities through the design of innovative learning spaces and the integration of technology. In 2005, Estrella Mountain forged partnerships with Herman Miller, Inc., and Goodmans Interior Structures in Arizona. Together they explored more effective approaches to the traditional classroom environment and engaged in discussions that resulted in the unique transformation of two liberal arts classrooms into prototype "Learning Studios."

The new Learning Studios provided faculty and learners with an opportunity to experiment with radical flexibility in space, furnishings, and technology—all targeted at increasing student engagement and success. Based on findings from a student focus group and considerable input from faculty, the prototype studios were designed as dynamic, customizable learning spaces that made the most of the face-to-face class experience. (See Figure 1.) Operating on the principle of radical flexibility, the design set up space, furniture, and technology to be changeable on the fly, not only making the rooms adaptable and more engaging but also enabling experimentation and further refinement by students and faculty using the studios. 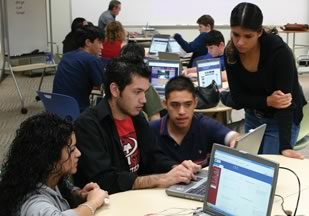 The overall goals of the project were:

Ultimately, each of the two studios was set up to accommodate 32 students in 900-square-foot rooms equipped with:

The design of the two learning studios was similar, but not identical. Differences were driven in part by distinct traits of the physical layout of the two spaces. For example, one of the rooms had no windows. To compensate, panels patterned with images of trees and water were placed in a zigzag arrangement along one of the existing walls to enliven the space. The wall also served to hold multiple whiteboards to encourage group discussions and informal learning within the formal learning environment. (See Figure 2.) 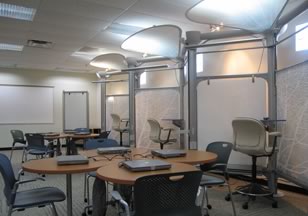 Other differences sprang from experimentation. For example, student desks in one studio consisted of wheeled tables with folding leaves. Depending on how the leaves were set, the tables served as desk space for two students, a group table for four students, or any number of other combinations; collapsing both leaves allowed the compact tables to be pushed aside. The other studio featured tables that when standing alone served as desks for individual students and when wheeled together could serve as large group work spaces.

One of the elements common to both learning studios was the infusion of technology. Both studios provided wireless-enabled laptops for students, giving them easy access to information and creating clearer sight lines than those afforded by desktop computers. Another notable feature of both studios was the use of "teaching stations" rather than fixed podiums for faculty. These mobile tables could be equipped with wireless-enabled laptops and wheeled to any position in the classroom. This broadened the ways faculty could approach their teaching and helped break down barriers between faculty and students.

All these features helped free students and faculty from the regimentation, tacit hierarchies, and institutional feel of traditional classrooms. In combination the features created a more fluid, collaborative setting, suiting students who are increasingly accustomed to highly interactive, technology-infused environments.

Using extensive feedback from students and faculty about their experiences and perceptions of the Learning Studios prototypes, the Learning Studios project team further improved the model. In 2006, the team applied the revised model to 22 classrooms in the new Ocotillo Hall classroom complex. With the opening of Ocotillo Hall, the college committed to the continued evaluation of existing spaces while creating more prototypes. Faculty and learners are encouraged to visualize, play, experiment, test, and asses prototype spaces before the institution makes significant investments in future capital or remodeling projects.

Created as alternative learning spaces for traditional liberal arts classes, the prototype Learning Studios are used primarily for classes. The studios depart from tradition, however, in the power they give both students and faculty to actively create environments that suit a range of learning activities. For the faculty, the studios not only enabled but inspired them to experiment with new approaches to teaching. The minimal setup time facilitated the ability to lecture, share a Web site, demonstrate an idea with PowerPoint projections, or even group the furniture at the edge of the room to simulate a theater. Students likewise could customize and adjust the space, from simply adjusting their chairs for greater comfort to setting up impromptu collaborative groups around whiteboards.

"Technology was everywhere, but not in the way," observed EMCC's E-Learning Faculty Coordinator Polly Miller in describing the seamless integration of technology in the Learning Studios. 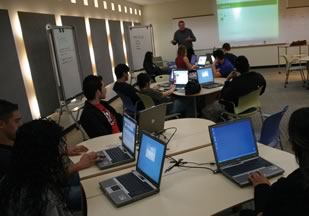 Students benefited from Internet access in finding quick answers and additional information about topics being discussed. They also appreciated the nonthreatening setting the studios presented for practicing and improving their technology skills. They gained from the guided discovery of computers and the Internet for research, current-affairs awareness, and fact checking.

Following the prototype project, the Learning Studios project team conducted an extensive study of students and faculty to determine the project's successes and shortcomings. The results were very positive.

Radical flexibility was embraced in the studios' space, furnishings, and technology. This important concept emerged from meetings, focus groups, and surveys on pedagogy and delivery strategies with students, faculty, and staff. It calls for the freeing of faculty and students from the physical limitations of traditional learning environments and from the constraints they can place on innovation and engagement in both teaching and learning. This was accomplished in the Learning Studios by making the rooms' physical elements (furniture, technologies, and so on) customizable on the fly by both faculty and students, so they could easily adapt them to the pedagogical demands of the moment. Through reliance on hands-on manipulation of the learning environment, radical flexibility also fosters a sense of ownership in the learning process. Its application to the Learning Studios project made for a dynamic learning environment that encouraged learning (both formal and informal), research, creativity, and collaboration.

Homero Lopez is the founding president of Estrella Mountain Community College and since 1987 has served as a consultant-evaluator for the Higher Learning Commission of the North Central Association of Colleges and Schools.