An urban research university with more than 29,000 students, Indiana University-Purdue University Indianapolis (IUPUI) supports both a wide range of high-level professional programs and undergraduate programs for a largely commuter student population. Because most of our undergraduate students are struggling to fit their studies within full lives that often include work, family, community service, or some combination of these responsibilities, IUPUI strives to create ways to make the campus "sticky." To help students establish an identity as students and as members of the IUPUI community and feel pride in IUPUI, we need to take every opportunity to create an environment that supports their studies and reinforces their decision to participate in higher education.

One such opportunity came in the form of a wide corridor that serves as a main passageway through the Education and Social Work (ES) building, one of four interconnected core academic buildings through which many people routinely pass. Several classrooms open into one side of this corridor, which is bordered on the remaining side by solid glass windows, allowing a panoramic view of downtown Indianapolis. The original design of the corridor provided for niches outside each classroom, which were furnished with a square built-in platform for seating. (See Figure 1.) 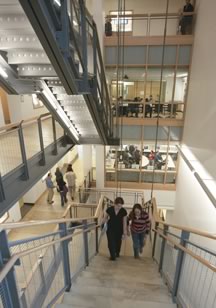 Entrusted with creating a good physical environment for learning, the IUPUI Learning Environments Committee seized on the ES corridor as a perfect place for an experiment in informal learning spaces. Having no funds for this experiment, we envisioned a "parade of learning spaces" competition, modeled on realtors' "parade of homes" competitions. We enlisted community partners—a furniture company and three leading interior design firms—to contribute designs for different kinds of spaces in this corridor and to implement them.

The participants created five unique learning spaces that test out different design elements, yet all are united in their intention to serve as a "front porch" to the adjoining classrooms: 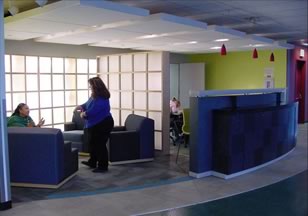 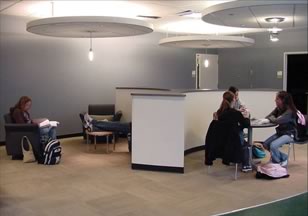 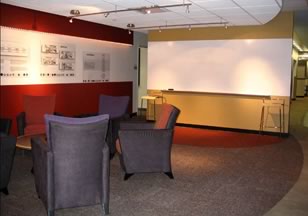 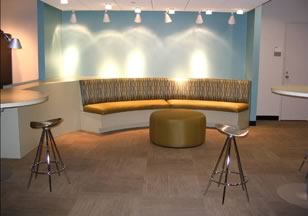 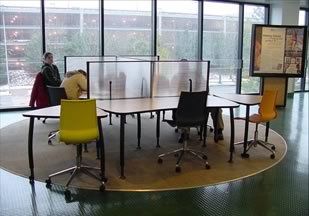 The corridor project also involved removing a rail between the corridor and windows, adding plants and carpeting, and changing the wall colors and lighting of the niches.

Our first series of studies of these spaces show that they are indeed used in a variety of ways.

Students use these spaces to read, solve problems, review class notes, and carry out other study tasks. They most often use the spaces prior to or following classes in the adjoining rooms, but some prefer these spaces as their normal places to be. One student joked that she was going to bring in a nameplate to label an area as "her office."

Even though these spaces are connected to a building with a café, many students eat lunch in the spaces and use the area for such activities as playing cards or having casual conversations.

Classes in the adjacent classrooms use the areas for group space or areas that will accommodate special activities. One course that involves clinical interviews used the spaces to simulate practice settings for students to do reciprocal interviews; another used them for students to practice first-aid techniques in groups.

Commuter students who find it hard to schedule meetings of project teams have taken to holding meetings in the spaces before or after class sessions. At any given time, one can see groups of students huddled around a laptop, diagramming on the whiteboard, or seated around a table with notebooks accomplishing some group activity.

Before or after class, faculty members can stop and chat with students in comfort. They report being relieved of the anxiety they feel when another class is waiting for the room or occupying it while their own students want to talk with them.

These spaces occupy a wireless environment, and students regularly use laptops in them. One finding of the first studies of the space, however, is that we did not provide enough power outlets for recharging batteries. The spaces also have no capabilities to project images from laptops to the walls or screens or to save information from the whiteboard for students working on a common project. Although the designers had entertained the idea of playing images off some of the surfaces in the corridor as a way to add interest or information (such as news feeds or educational videos), the final design did not include resources to support these ideas. Successive corridor projects will have to consider integrating technologies in a more systematic way.

The renovated ES corridor provides attractive, comfortable surroundings for people passing through or stopping to use the space. It is close to formal learning spaces and offers areas outside classrooms for students to meet and work. The spaces have also contributed to feelings of pride in the campus and the building of relationships among students and faculty.

One of the main reasons for the success of this space is its attractiveness. Design, color, and lighting command the attention of those using the corridor. First impressions recorded in the study underscored the students' excitement with the overall "feel" of the corridor. Students who were interviewed compared it to the commercial spaces in bookstores and coffee shops where they like to linger. They also praised the associated quality of comfort, singling out the comfortable upholstered furniture as desirable over the hard plastic chairs and metal or wooden stools used in the designs.

The space also succeeds because of its proximity to formal learning activities. As "front porches" to classrooms, the spaces serve as places where busy students can meet and work without having to spend precious time walking to and from the library or other formal or informal learning spaces. They provide a convenient meeting space for groups or study partners seeking to get together before or after classes scheduled in the adjoining rooms.

The spaces also serve the formal classrooms in providing overflow areas for special activities—group work, practice clinical interviews, tutoring, and other components of the class-based instruction. Instructors who had not ordinarily incorporated active learning components in their course design reported that they now use these spaces routinely for students to discuss, run simulations, plan, or accomplish other learning tasks. The spaces thereby illustrate a teaching development impact.

Less tangible, but no less important, is the impact that the spaces have had on campus pride and the building of relationships. The comfortable and attractive ambiance of the spaces has led to lingering, socializing, and group work—all vital to our campus as it struggles with retention and student success. The spaces have also increased pride in IUPUI as a learning space. One faculty member commented, "I think it was one of the wisest uses of space and the best thing I have seen for students in many years."

When the project was proposed to the companies that ultimately brought it to fruition, the learning principles behind it were emphasized. The Learning Environments Committee had articulated these early on in two papers1 and in a slide show prepared to invite the partners to participate in the ES Corridor Project. The learning principles are rooted in current theories of cognition that stress active engagement in the construction of knowledge; on student retention theories that point to the importance of engagement and identification in the campus; in data on the changing composition of the student body that emphasize social learning, multitasking, and technology use; and on principles of space design that focus on flexibility, aesthetics, practicality, and functionality. These and other aspects of the project were emphasized in a presentation at the EDUCAUSE Learning Initiative (ELI) 2005 Fall Focus Session.2

Several features stand out in the ES corridor redesign: the community partnership involved in the design and implementation; the regular assessment conducted on its impact; and its replicability.

One of the most noteworthy aspects of this project is the community partnership involved, which represents a contribution of about $400,000 worth of goods and services to IUPUI from nearly 30 firms including the original furniture company, RJE Business Interiors; the three leading Indianapolis design firms, CSO, Maregatti, and Rowland; and many other contributors ranging from cabinet makers to lighting installers. It is thus a case in philanthropy as well as space construction. Our partners were delighted with the opportunity to do something meaningful that engaged their talents in service to the community. The "parade of learning spaces" idea was replaced with an exercise in collaboration. Designers who had previously only worked in competition found that they derived considerable enjoyment from working together. They found the original design charrette to be exciting and inspiring. The partners became even more invested with IUPUI than previously. The collaboration between the partners continues as they talk about this project and its impact.

A second noteworthy aspect of this project is the way in which it has been studied. IUPUI's values on undergraduate research and the existence of its Interior Design Department and School of Education were tremendous assets to call upon in the study of our ES corridor spaces. An interior design faculty member identified two students desiring practicum credit for a postoccupancy study, and an education faculty member pointed a graduate student toward this project for her paper in a capstone course. The study team developed a comprehensive design that involved nonparticipant observation of the spaces and surveys of students, faculty, and maintenance staff involved in the spaces. Study results were reported to each of the firms that contributed to the design and construction of the spaces, as well as in national presentations and publications.3 The emphasis has been on understanding the impact of the spaces.

Finally, the project is spawning the design and construction of other informal learning spaces. It has demonstrated that not all learning takes place in classrooms and that the establishment of places for interchange, project work, or socialization directly influences student success and persistence. As a model space, it has inspired others to request similar spaces in their locations. At the time of this writing, five other projects are being developed along with a major request for funding. Results of the impact study will be reflected in the design of these spaces and have also captured attention outside the university.