BOX [http://www.boxexchange.net/] is an innovation lab established in 2004 at the London School of Economics and Political Science (LSE). BOX facilitates the international exchange of innovation-focused research by bringing together people from academia and business to engage in complex problem-solving tasks or to accelerate and improve decision making across large groups.

LSE is a world-class center for teaching and research across the full range of the social, political, and economic sciences. LSE seeks to be a laboratory of the social sciences, a place where ideas are developed, analyzed, evaluated, and disseminated around the globe. The LSE consists of 19 academic departments and 5 interdisciplinary institutes with 7,500 full-time students and around 800 part-time students, 52 percent of whom are postgraduates. LSE has more than 1,700 full-time staff, with 97 percent of them actively engaged in research.

BOX exemplifies a new type of hybrid academic/commercial space that blurs the boundaries between the classroom, the laboratory, the office, and the club. It also reflects the current organizational imperative to create new types of workplaces specifically designed for encouraging creative behaviors and supporting innovation.1 Innovation laboratories can take various forms but generally blend space, artifacts, and event facilitation. The key purposes of the physical space are to emphasize dislocation from day-to-day activity, eliminate organizational hierarchy, and encourage participation.2

The lab itself is 220 square meters of space in the heart of the LSE's central London campus. BOX provides a dynamic learning environment enriched with the latest ambient technology3 and influenced by the comfort of home and the eclecticism of the Far East. A key feature of the design is the Cabinet of Wonder, a wall holding visible and invisible treasures that enable the viewer to see the world in a multitude of ways. The Cabinet of Wonder uses light, sounds, and artifacts to intrigue as well as encourage discussion and original thinking. 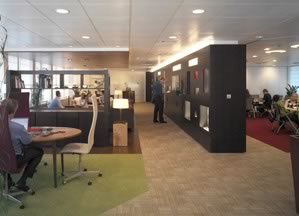 BOX is the first node in a wholly new kind of space that provides innovation and knowledge transfer services to a tightly linked, international university-business network. It functions as a laboratory for academics and students from a number of LSE academic departments exploring decision making and collaboration processes. Participants explore these processes through a diverse range of workshops featuring various facilitation tools and techniques such as LEGO Serious Play. (See Figure 2.)

Figure 2. A Networking Event at BOX 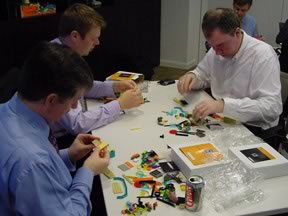 The space is also used by academics linked to the BOX research program as a community club to inhabit, communicate, and explore ideas. (See http://boxchange.blogspot.com/.) BOX hosts a significant number of internal LSE seminars and workshops, as well as collaborative policy development events for both governmental and nongovernmental organizations, such as the workshop Creating Pro-Poor Markets for Ecosystem Services, organized by the United Nations Environmental Program in conjunction with the LSE.

When developing the brief for BOX, one of the guiding principles was that the space should not be about technology. The BOX experience is about collaboration, face-to-face communication, and mind-body, physical activity, including play. Initial aspirations to exclude all plasma screens and ban PowerPoint, however, had to be tempered by an understanding of the diverse nature of BOX users and events. Consequently, a Category 5 structured cable system was installed throughout the space to allow access to LSE and corporate networks, and a plasma screen was built into the Cabinet of Wonder (but hidden behind wood panels).

Most of the technology installed at BOX is designed to take participants out of their normal realm of experience and, through exposing them to objects of wonder, inspire "good play" and deep, collaborative emergence of new ideas:

BOX is a unique learning environment designed to raise more questions than it answers. The apparently random combination of virtual and physical artifacts contributes to the overall narrative about complexity and emergence. Two-hundred-year-old tables jostle for attention with books on planetary exploration; 150-million-year-old fossils can be held and examined; and LEGOs can be used to explore complex problems. The space encourages interaction with objects?tactile explorations of the past, present, and future.

The goal of the space is to provoke wonder and curiosity. Feedback from both academic and commercial participants has been overwhelmingly positive, despite some initial concerns about the birdsong and Cabinet of Wonder. A workshop or seminar at BOX is something you remember and talk about with colleagues.

The space has been adaptable enough to support small-scale intensive workshops and large-scale interactive sessions for up to 100 where every bit of space is used for seminar and breakout or socializing space. What has worked particularly well is the division of the space into two halves: the highly expressive, idiosyncratic side containing the front of the cabinet and a range of informal seating and work areas, and on the other side of cabinet, an open space with retracting dividing walls and mobile, stacking furniture that can be used to create the appropriate layout for each event. Universities in Europe, Asia, and North America have already shown interest in developing similar blended academic and commercial spaces exploring innovation processes.

Innovation and creativity are increasingly seen as critical to the continued success of both individual organizations and economies. BOX is at the forefront of initiatives around the world creating new types of academic and commercial partnerships and exploring the role that buildings and places can play in fostering innovation and creativity.

BOX is one of the LSE's responses to the 2003 Lambert Review of Business-University Collaboration in the United Kingdom.4 This review explored how U.K. business can sharpen its competitive edge through new types of partnerships with universities: accessing new ideas and expertise, participating in publicly funded research projects, and recruiting new staff direct from the universities. BOX has provided a focus for interaction and research between the LSE, the corporate BOX partners, and the wider group of public and private organizations who participate in BOX events.

In 2005, for example, Sir George Cox, the chairman of the Design Council, was commissioned to examine how U.K. businesses?subject matter experts and modern manufacturers in particular?apply creativity and design to improve their productivity and performance. His report5 argued that challenges posed by the global knowledge economy mean that the future of the U.K. economy depends on "design, innovation, creativity, exploitation of technology, and speed to market." Data gathered by the Cox Review suggests, however, that 86 percent of senior management lack the skills to lead the U.K. economy in this direction. Two key reasons for this failure are dull physical work environments and a workplace atmosphere and working practices not conducive to the development of creative skills. In short, how people work and where they work need to change in order to meet the challenges identified by the Cox Review.

As the managing director of BOX put it:

The root of the idea, like all big ideas, can be simply put: the history not just of humankind but of all existence can be seen as the emergence?the necessary emergence?of new patterns, and new structure, out of a maelstrom of complex interactions. Given enough richness of interaction and complexity, innovation will result?and, usually, all at once.

What we do at BOX is intend that sudden emergence of order, right from the heart of what can seem blindingly complex, and then, in the light of behavioural science, look at the emergent properties that develop. And?delightfully?we find that the best tools of this new trade are a cultivated capacity for hands-on, playful fun, built on a child's sense and intuition for wonder and inspiration. At BOX, innovation, week by week, is the profoundly simple result of playing well.6

BOX is a new type of academic space?the physical manifestation of a new type of academic-business collaboration. The LSE has been a fundamental part of its success and remains deeply involved, linking BOX to its ongoing research program and engagement with industry as well as introducing BOX to other institutions the LSE collaborates with in other parts of the world. This is a two-way process; BOX is also committed to introducing its commercial clients to the diverse expertise available at the LSE and to developing opportunities for funded research and development of new business opportunities for the LSE.

The creation of BOX was an intensive and personal process involving a collaboration among the client, the academic institution, and the design team at DEGW. The project included creating the name of the space, determining its graphic and visual identity, designing the space, choosing the technology strategy, and selecting and curating the objects in the space. During the 12-week design process, more than 20 different consultants contributed to the concept's successful execution. As BOX expands to become a global network of innovation spaces, the challenge will be to create similarly rich, idiosyncratic, and message-laden spaces that reflect the unique academic cultures in which they are embedded.

BOX was initially funded and managed by EDS as part of its ongoing relationship with the London School of Economics. While EDS continues to fund a research program at the LSE, the company no longer has a direct role at BOX. BOX is now an independent entity directed by Lewis Pinault, working with partners to deliver innovation and knowledge transfer services at the LSE.

Andrew Harrison is director of learning environments, DEGW, and was the project lead for BOX.