A SCALE-UP classroom looks like a restaurant, with 7-foot-diameter round tables that each seat three teams of three students. (SCALE-UP stands for Student-Centered Activities for Large-Enrollment Undergraduate Programs.) Each team has a laptop to support their learning, as well as ready access to laboratory equipment in surrounding closets. Computer projection screens sit at opposite ends of the room. Large whiteboards cover the walls. A teacher station, with document camera and possibly a Tablet PC, is usually located near the center of the space.

Although SCALE-UP rooms can be found at various institutions, they were originally designed for research universities that offer large introductory classes. Several models hold 99 students taking introductory physics or chemistry for science and engineering majors. Some rooms are larger, but most are smaller. Pictures of a few of the classrooms can be seen at <http://scaleup.ncsu.edu/>. Other courses taught this way include mathematics, biology, and even comparative literature.

Figure 1 shows 4 of the 11 tables in the SCALE-UP classroom at North Carolina State University. Normally, each table would have one laptop per team, but the room is also used as a computer lab, so in this view each seat has a laptop. 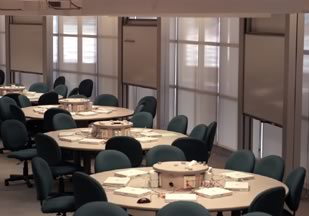 North Carolina State University is North Carolina's largest public university with more than 7,000 full-time employees and 30,000 students and degrees awarded in more than 100 fields of study. Located in Raleigh, North Carolina, NC State is a land-grant university with extension offices in all 100 counties and the Cherokee Reservation. NC State's Centennial Campus serves as a national model of university-business collaboration and incubation.

Tables in SCALE-UP rooms facilitate interactions among students as they work on activities. Most of the time students work in their assigned teams. Tasks are classified as tangibles, ponderables, or labs. Tangible activities involve hands-on observations or measurements and typically take no more than 15 minutes to complete and discuss. Equipment used is typically quite simple, like meter sticks or racquetballs. Ponderables allow groups to work together on complex, real-world problems involving approximations, assumptions, and often some Internet sleuthing. These also typically take approximately 15 minutes to complete. Laboratory activities take place in the same classroom space, but several characteristics distinguish them from tangibles: they take longer to complete, they are usually hypothesis-driven, and they frequently require some type of formal write-up.

The room layout allows the instructor and teaching assistants to reach every student and engage them in Socratic dialogues as they work. All students have name tags, so hiding or remaining anonymous is impossible. The Web is used to collect student answers to questions raised by the instructor, and histograms of student responses are displayed for discussion. (This is similar to the use of a "clicker" student response system.) Students are encouraged to take risks and challenge each other. The surrounding whiteboards act as public thinking spaces. Students can see what others are doing and engage each other in discussion. When students work on activities where everyone is likely to take a similar approach, they work on smaller lap-sized whiteboards. That way, their work remains visible within the team and to the roaming instructor, but not to other groups.

Originally, the word technology meant "systematic treatment." Based on that idea, the round tables are the most important instructional technology in the classroom. The ideal size was found after experimentation with half a dozen table geometries. The 7-foot diameter permits table-wide conversations while being both large enough to avoid crowding and small enough for efficient use of space. Tables that are too large actually discourage table-wide discussions.

Each team of three students has a dedicated laptop with Internet access. (We tried one, two, and three computers for each team. One computer per team works best. We also found the smaller footprint and lower screen height of laptops offer definite advantages over desktop computers.) Students use these laptops to find information relevant to the task at hand, whether they need to know the atomic mass of aluminum or the mass of a racquetball. The course Web site is always available, along with access to a Web-based question delivery system (WebAssign). We use the laptops to present questions to groups and provide directions for class activities. They also serve as computer programming platforms.

We developed VPython, a 3D output extension to the Python programming language. Students create objects such as spheres and arrows, give them physical properties (mass and velocity, for example), and then "teach" them to interact according to physical laws. Although there are no output statements, the programming environment automatically generates output in a realistic world of three dimensions, with hidden surfaces, zooming, rotating, and so on. When student work is somehow unique or representative of a good solution, we can easily display it for the entire class to see. Similarly, we can share the instructor's screen on the student laptops.

Group interactions are the key to making this instructional space work. We have seen dramatically decreased failure rates for minorities and women (down to one-quarter the failure rates in traditional classes). We believe this success results from the social interactions and risk taking the room design and instructional approach promote. Also, we carefully and deliberately created our learning objectives, which included not only content but also communication and technology skills. From those objectives we crafted each aspect of the learning experience, from homework assignments to room layout. Along with each objective we developed methods of assessing whether we succeeded in accomplishing the chosen goals. In other words, the instruction was deliberate and intentional.

Whiteboards along the SCALE-UP classroom's walls provide a "public thinking space." Figure 2, for example, shows a whiteboard where three teams at table 7 have sketched graphs of the height of a bouncing ball. Even the equipment closet doors have whiteboards for student use (see Figure 3). 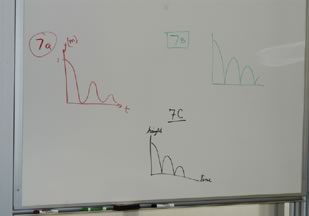 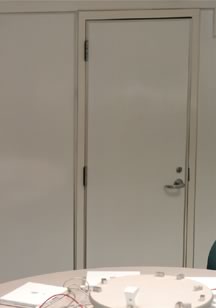 Social interactions are central to the SCALE-UP pedagogical approach. Vygotsky's social cognition1 is a major component of what we try to make happen. The table shape and spacing, along with the surrounding whiteboards, promote active discussion and debate.2 The curriculum incorporates well-known aspects of collaborative learning (individual accountability, positive interdependence, face-to-face interaction, appropriate use of interpersonal skills, and group self-assessment).3 The instructor circulates about the room, engaging students in Socratic dialogues.4 These factors challenge students to work at the upper levels of Bloom's taxonomy, synthesis and evaluation.5

We were very deliberate in designing the learning environment. Everything from the seating to assignments to interactions between students and instructors is part of the "technology" of the room. Starting from objectives, we could craft instructional sequences and assess whether they succeeded. This information was then fed back into revising the curriculum, pedagogy, and environment. Just like the restaurant setting it resembles, a SCALE-UP classroom is a friendly, comfortable space. People interact while focusing on physical phenomena (instead of food) and can accomplish much more than they could working alone.