Steam Café at MIT is a spatial experiment, both physical and virtual, that serves up great food and community interaction. The café arose as a collaborative venture of students from the School of Architecture and Planning in partnership with MIT Dining and the Sodexho Corporation. Steam uses "open source" problem solving to bring people together to discuss and improve the venture-an ongoing creation of food and space that reflects and inspires a community.

Steam Café has become a destination for the entire MIT community-a place where food and constant dialogue create an energetic exchange of ideas and a place for informal learning as part of everyday life. Delicious, healthy food from around the world is served here every day, with equal emphasis on nutrition and community interaction. (See Figure 1.) 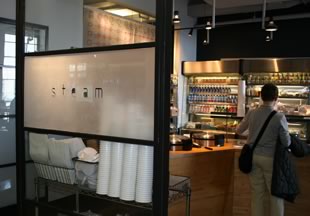 The space consists of a 300-square-foot serving area, a series of specially designed booths that flank an intersection along MIT's Infinite Corridor, and a Web site designed to elicit regular input from the community.

Steam Café offers a place to eat, socialize, and work, in many combinations. Food is available between 8:00 a.m. and 5:00 p.m., but people use the space 24 hours a day. Visitors to Steam find diverse numbers and types of people using the space in many different ways, depending on the time of day. The most common uses are for:

Each booth consists of a table that users can relocate for special functions and open-box benches that allow for many seating configurations. (See Figure 2.) Up to six people can use a booth when the café is busy, or a student can lie down for a nap on a booth bench during quiet times. 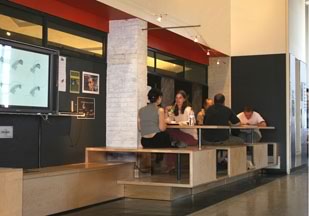 Lighting was critical in achieving the desired atmosphere and task-sensitive work environment. A low-voltage system provides warm but bright light and a lower installation cost.

The café Web site is an important feature, as it provides a way for customers to remotely review the daily menu, check ingredients, and submit feedback or new recipe ideas. The intention was to design a simple, fail-safe, aesthetically stimulating interface without confusing or frustrating users with excessive choices or information. Users have commented on the ease and directness of use as a motivator for regular visits.

Another feature of the café is a large plasma monitor in the center of the booth seating area. Although this monitor predated the café, we gave it an additional function by turning it into a Web access point using the Steam Web site as its home page. The idea was to create a place for public discussions about Web content-an alternative to the tendency for individuals to huddle around tiny screens or, more commonly, to work in isolation when online. The café provided the opportunity to turn the Web into a public space beyond the virtual. Patrons or passersby can now listen or watch while impromptu discussions about Web content take place.

Blanketing this area is MIT's signature ubiquitous wireless network. Because people can use wireless anywhere, the café's special features become that much more important in influencing where people choose to congregate.

Steam Café succeeds largely because of the

Steam Café thrives because of the people who take varying levels of ownership for it, from the first-time patron to the foodie who submits a recipe to and interacts with the chefs and managers. At any given time visitors might encounter students from any program on campus, as well as professors, administrators, plumbers, and even the president of MIT. Steam sees a constant flow of people mixing, talking excitedly, meeting formally or informally, and eating in the booths. Ideas are developed and consumed here in even greater quantity than the food!

Food is a great motivator, however, and Steam provides a healthy alternative that draws people from across campus. Steam embodies the idea that the quality of the food we eat has a direct consequence in our daily lives, as well as having longer-term personal and societal health implications. Part of the café's mission was to give voice to a growing awareness that universities should be leaders in conveying this message. Steam functions both as an expression of these values and as a type of physical resource that more and more students demand.

Most of the students involved in the design process were architects with a commitment and sensitivity to the physical environment. Despite the extremely tight construction budget, the design team contemplated every detail of the space to determine how it might contribute to the project's underlying goals. Customer flow, materials, lighting, ergonomics, maintenance, serviceability, and "urban" connectivity were all seen as part of creating a space that worked at many levels. This rigorous design process was led by students with real-world experience and intimate knowledge of the institution, guided by the realities of schedule and budget.

A key strategy behind Steam was building a sense of ownership and empowerment. Initiated by students, the project continued to have student involvement at every level of implementation. The design of the menu, Web site, seating booths, food-service island, product selection, and hours of operation all involved students in discussion with the administration and corporate sponsors. Students even constructed the countertops of the café in the MIT hobby shop by recycling old conference tables slated for the dump.

The Web site serves as a critical tool to extend the original spirit of participation into Steam Café's ongoing life. While the physical infrastructure probably won't change much over the next few years, the food changes every day, offering a great way to engage new students on a regular basis.

The design team developed key objectives for Steam Café and then explored numerous ways of achieving them given the many limitations. We wanted the space to have a magnetic quality that would encourage dense occupation, thus fostering connectivity and collaboration. We wanted the theme of healthy food to be expressed as a guiding principle We also wanted to take advantage of open source as a design concept, but one that could be guided by strong leadership.

Magnetism: Drawing people together into a common space was an underlying goal and guiding principle. Food provides the initial pull, but an equally important attraction is the people who come for the food. As good urban spaces demonstrate, people attract more people. This magnetic "watering hole" concept keeps the dialogue flowing at Steam Café and makes it more than a place to simply get food.

Density and collaboration: Once we had attracted people to the space, we wanted to seat them close together-a principle also key to maximizing the small amount of space available for seating. The booths' backless design cuts down on the space needed but also allows people to turn and socialize with those at adjacent tables. This proximity puts people into regular and serendipitous contact. This made its "Main Street" location critical to ensure a constant stream of new faces. The booths take advantage of this central location as well. Seating and table height are elevated 10 feet, providing an overlook of the area. This brings the eye level of seated patrons close to that of passing colleagues and encourages more spontaneous conversation between the stationary and the mobile visitors. Collaboration is further supported by the built-in chalkboard in each booth. The board encourages brainstorming and informal learning discourse. Notes left behind add to the texture and culture of the place. (See Figure 3.) 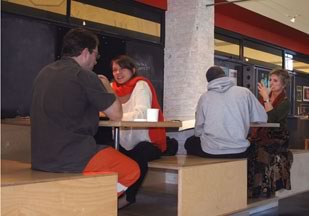 Open source and leadership: The principle of participatory design was central to the Steam Café process, and we felt from the beginning that it was best embodied by the open source model. We also felt, however, that leadership was critical: individual ideas, expertise, and oversight set direction and standards. A common confusion about open source is the assumption that the mere fact of participation guarantees success, or that self-organization necessarily produces desirable results. We felt the need to establish clear values in the beginning of the project that could guide progress and provide benchmarks for evaluation. To this end, an ongoing role for individuals exists at many levels, to take responsibility for the direction and outcome even after the founders of the project have moved on.

Steam Café offers benefits to MIT that exceed its original goals by offering a new business model, expanding to host evening and weekend events, aligning with the university's mission, and spawning new initiatives.

Creating a new business model: Not only does Steam provide a community service to the MIT campus, it also became a profitable business model for the Sodexho Corporation. Steam replaced an existing café in the same location, and within the first two weeks of its operation, revenue close to tripled.

Expanding beyond intended use: Since its opening, the Steam location has become a desirable place for evening and weekend events, including receptions for world-class lectures and visiting school groups. The movable booth tables can be rearranged in a more social configuration or removed to configure a bar or counter in any location; the stationary booth seating remains as casual perches for sitting or resting a drink.

Aligning with university mission: The Steam Café project received support from several key administrators who had studied the need for greater informal and spontaneous interaction on the campus. Isaac Colbert, dean of graduate students at MIT, had recently developed a report1 that identified the "priceless encounter" concept, describing the kind of diverse off-the-grid interaction that MIT's graduate students felt were fundamental to their education but not always provided on campus. Steam Café tapped into these visions and values in a direct way, offering a pragmatic and expressive contribution to the ongoing dialogue of campus development.

Spawning new initiatives: Steam Café was the first project initiated by the student group Culture Lab. Steam's success prompted an outpouring of demand for similar projects on campus. Since the Steam Café opening in 2004, the Culture Lab has involved more than 50 students in designing seven innovative projects on campus, including a nap room, an A/V theater, and a schematic proposal for a major visitor center building on Massachusetts Avenue in Boston. Several of these projects have already been implemented.

The Steam Café project was led by Scott Francisco and Nick Senske of MIT. Both were completing their master's of science in architecture studies at the time.

Scott Francisco is a senior consultant with DEGW North America in New York City, focusing on the relationships among space, community, and organizational culture.