Chapter 40. The USITE/Crerar Computing Cluster and Cybercafé
University of Chicago

The USITE/Crerar Computing Cluster and Cybercafé is a public computing laboratory within the John Crerar Library at the University of Chicago. The story of its development is a testament to design that goes beyond seats and square feet to a vision based on response to user needs.

USITE, once merely an acronym for the terminal room of the central computer users' site, evolved beyond one space to represent a new kind of technology-enabled learning environment. The team that developed the new USITE model looked beyond the "seat problem" in 1998 and challenged the campus notion of the public computing lab. They asked:

The team believed that space and technology should adapt to users, rather than the users adapting to the limitations of space. This led to a concept of space that offered many kinds of user-friendly activity areas, a variety of technology options, and compelling, comfortable, and adaptive settings for collaborative work. The study results were presented in December 1998; construction was approved in June 1999; and USITE/Crerar opened in May 2000. By the end of that month, nearly 1,000 users were visiting the site every day. 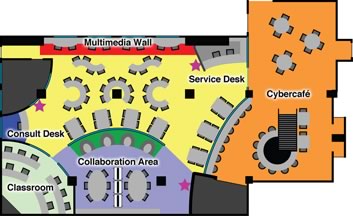 USITE/Crerar has become a model for computer lab and technology-enhanced space design in facilities such as the Cox Computing Center at Emory University (see chapter 8), Arc Technology Center at Washington University in St. Louis, and Christopher Center for Library and Information Resources at Valparaiso University.

Students, faculty, and staff use the cybercafé space for studying, conversing, and informal meetings. Windows workstations along one wall transform the area into a 24-hour academic space for students, and a shop at one end sells drinks and snacks. (See Figure 2.)

Figure 2. Cybercafé with Shop and WebStations 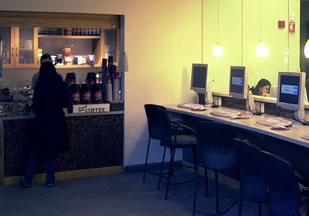 In the general computing area students work independently or in small groups on projects that require access to specialized software and multiple computer platforms. Larger individual work spaces let students spread out materials or work together. Figure 3 shows the main computing space looking toward the consultation/service desk; the media wall is on the right side of the photo. Along the 40-foot media wall, eight MacOS workstations provide the technology foundation for digital video, scanning, and audio projects-whose demands have grown over the past few years. 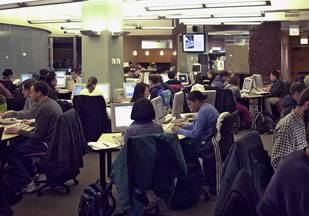 Dubbed the "boardroom" by students, the glass-enclosed visualization classroom functions both as a quiet lab space and a 10-seat teaching space. (See Figure 4.) The curved tables focus attention on a large screen often used by the visual arts department for digital video production classes. The classroom also serves as a campus videoconferencing facility; it has been used for events ranging from thesis defenses and provost-level meetings to joint course offerings with Northwestern University and a live performance of a Chicago-based blues harmonica player and his guitarist over Internet2 to a class at the University of Wisconsin–Madison. 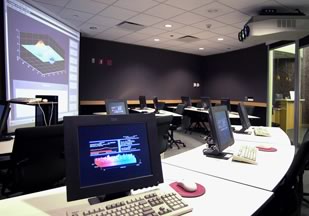 The four restaurant-style collaboration booths within the seminar area allow up to three people to work together around a single monitor in a casual, comfortable, nest-like setting. (See Figure 6.) There are not enough booths to keep up with demand, as students camp within and hand off the booths throughout the day.

The consultation desk provides a place for users to sit down with teaching assistants, librarians, or staff who have office hours within the cluster. This space is also used by others who periodically provide services to students, such as helping international students prepare their taxes. The student staff at the service desk manage the space and provide assistance on computer-related issues. The original student-developed touch-screen printing system has been replaced by a commercial product that functions in a similar manner; both color and high-speed black-and-white laser printing are available to any user on campus.

People use computing labs in unexpected ways, so the space was designed to accommodate novel purposes. Because of USITE/Crerar's size, the planning team included a public address system for the space. The team assumed that at some point a student would reverse-engineer the sound system in order to play music over the room speakers. Rather than limit such behavior, the team agreed to include a way to hook up a CD player to the PA system. Within a year, an undergraduate employee who was a part-time DJ hosted his iPod-based "Dance Night Fridays" for an audience of medical school students. Together, they reconfigured the general-purpose computing space into a dance floor-while other students continued to work in the lab.

Although USITE/Crerar is managed by the central IT organization and provides capabilities expected of a computer lab, technology is not the focus. Primary consideration went to the work environment and its users; the technology flows from that. Spaces were designed to allow technology to evolve over time, adapting to the community's ever-changing needs. The facility is used

When USITE/Crerar opened in 2000, it was one of the most advanced computing facilities on campus, with more than 80 percent of the technology new and untested in a public environment. Today, the technology has matured, but the environment continues as a test bed for new approaches, services, and infrastructure. For example, flat-panel LCD displays were a radical idea in 1999. Because they are smaller and easier to move than regular desktop displays, LCDs were integrated in the space to facilitate collaboration and increase usable desk space. Likewise, the network is a critical enabler established with the belief that rapid and reliable access to information would be crucial to scholarship. USITE/Crerar became an experiment for CAT 6 cabling, alternate switching schemes, and a planned exploration of gigabit-to-the-desktop capabilities.

Faced with the challenge of creating the Internet equivalent of the classic phone booth within the cybercafé, the team decided to adopt Sun Ray thin clients from Sun Microsystems. The 16-seat thin-client deployment became the model for the WebStation service that now boasts more than 70 kiosks in approximately 10 locations across campus. In addition, users needed an easy way to connect their laptops to the Internet. Although data jacks were installed throughout the space, hardwired connections are not always convenient. As a result, the first public wireless access point on campus was installed in USITE/Crerar. Visitors to the cybercafé stations can quickly check their e-mail and conduct Web searches using wired or wireless access.

Both the classroom and seminar area can be used for teaching, team presentation rehearsal, and group information analysis. The classroom is equipped with a projector and 10 workstations equipped for graphics, simulation programs, and digital media applications. The classroom's videoconferencing facilities can be used by classes or any other groups interested in conversing with remote collaborators, students in the university's Paris Center, or other institutions. Plans are under way to equip the classroom with an AccessGrid node that would be open to all members of the campus community.

Multiple factors contribute to the success of USITE/Crerar, from clarity of mission to extensive use of technology, variety of work settings, ingenious design, attention to detail, and department-store-style management.

The mission of USITE, and Crerar in particular, is to provide access to technologies, applications, and resources normally out of reach of the average user but necessary for scholarly success. The space succeeds because it blends the needs of its users seamlessly with the physical and technological environment. Color and high-speed black-and-white laser printers, large-screen displays, data projectors, slide-capable flatbed scanners, professional-grade digital video decks, removable FireWire hard drives, headphones, and a host of other technologies as well as academic software meet users' needs.

The center offers a wide range of computer-equipped settings, providing users with different places to work, either in small groups or independently. Variety was part of the design. Corners, curves, open spaces, and partitions fill the lab, allowing users to select a work environment that matches their styles. Carefully selected materials and elements break down the scale of the space. For example, the variety in ceiling heights and treatment creates a different character in the main space than the more intimate collaboration area. The "found" space below the landing of the entry stairs was exploited to create an intimate cluster of stations with a low ceiling, in contrast with the high ceiling of the main lab.

Inspiration came from many sources, such as restaurant design. Banquette seating and decorative pendant lighting call to mind comfortable cafes. These banquettes for three provide a table with a flexible arm supporting the monitor above the table surface and the CPUs tucked unobtrusively below. A prominent translucent curved wall defines a separate area without actually partitioning it off and helps give a sense of closure to the area it defines. A fritted pattern of fine vertical stripes on the glass allows staff at the desk to see into the enclosed space, yet it is perceived as translucent from other angles.

The goal was to create a single space that could serve multiple groups with myriad needs-from undergraduates and instructors to medical students and administrators-under one management framework. Using a department-store-type management approach, USITE/Crerar successfully addresses needs ranging from computer access to remote collaboration.

Some key principles went into the design: 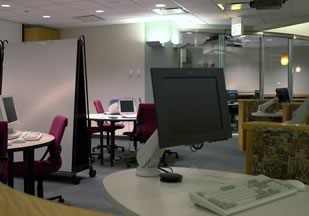 One of the most unique aspects of this project was the visionary planning process. The planning team spent a year-and the initial funding-on wide consultation and thoughtful planning and design, gambling that the strength of the concept would serve as a springboard for future projects. The team looked for ideas outside the institution, visiting coffee shops, restaurants, bookstores, subway stations, and other places where people gather and work, both formally and informally. These ideas coalesced into design concepts. Ultimately, the planning process proved so successful that the study produced a fully funded space and changed the paradigm for future technology-equipped spaces. The computing center has prompted considerable cultural change at the University of Chicago. Although a venue for students, USITE/Crerar has become a destination for administrators, visitors, and classes. Similar facilities are now viewed as extensions of the learning experience, not merely a required, centrally provided resource.

Because technology and user needs change more often than built space, the computing cluster was built on raised flooring with flexible furnishings such as whiteboards on casters so that users could move furniture around as desired, reconfiguring the space without additional construction. The plan also matched technology carefully to program needs. The use of thin clients as Web and e-mail kiosks is a prime example of understanding a programmatic need and letting the technology flow from that.

Another benefit of the design was the repurposing of underutilized library space. The basement space directly accessible off the entry stairs gained a new energy, and the lab is credited with increasing traffic through the John Crerar Library.

VMC Architects of Chicago worked with the design team in planning the USITE/Crerar Computing Cluster and Cybercafé. A special acknowledgment to the late Kathleen Zar, former head science librarian at the John Crerar Library, who was instrumental in shaping the vision for USITE/Crerar from a library perspective, tirelessly worked to ensure the project was a success, and quietly helped transform the model of learning environments at the University of Chicago.

Shirley Dugdale is the director of learning environments at DEGW North America, LLC.

Chad Kainz is the senior director of academic technologies at the University of Chicago.